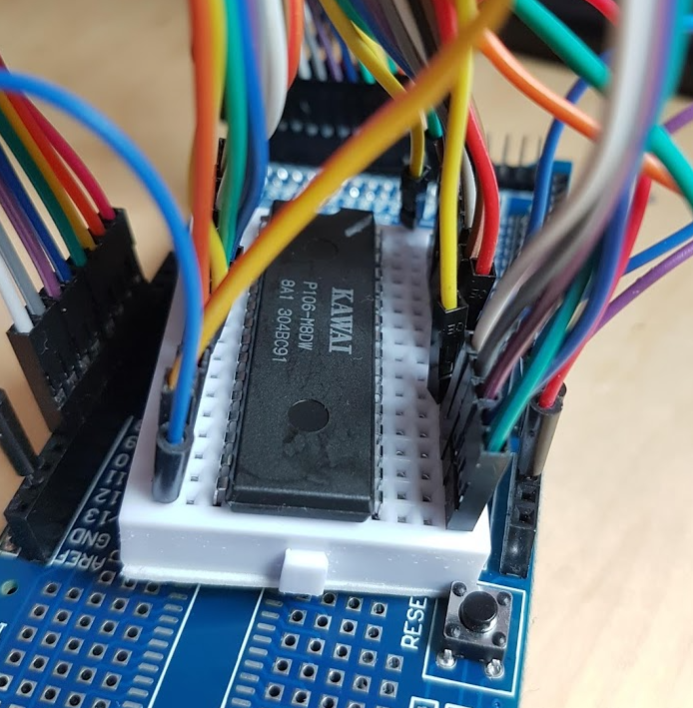 I was not 100% happy with my waveform recordings, I outlined it briefly in one of my previous articles, where I explained how I recorded them.

The recordings still had the issue of being quite large in size, and more importantly, they contained noise. It’s not just simple noise from some amplifiers (that one is also there, but very low). The K1 resamples the waveforms pretty badly and the aliasing that this produces is clearly audible.

Don’t get me wrong, of course, I want to recreate the aliasing and the dirtyness, as it is part of the K1s character, but it does not help if it is already part of the waveforms, which should be as pure as possible as they are pitched during playback. The aliasing needs to be added at a later stage in the audio generation process. Details about it can be found here.

I was browsing the K1 service manual, my intention was to repair my broken K1m, which still suffers from broken envelope attacks, when I noticed the pinout of a chip that had the letters WAVE ROM behind it.

If you have read some of my other articles, you might know that I’m a bit into Home Automation things. For this, I not only buy ready-to-use devices, but also create my own, using Arduinos or similar microcomputers. Given that the pinout of this chip is pretty straightforward, just some address lines and some data lines, I wanted to give it a try.

The service manual lists the used chip as being a HN62304BP. I’ve searched the internet and found a data sheet. I verified that the pinout was identical to the Kawai layout.

More information that I’ve taken from it: Its size is 4Mbit, or 512KiB and the operating voltage is 5V.

5 Volts perfectly fits an Arduino, but having 19 address lines and 8 data lines, my Arduinos and NodeMCU devices that I have laying around lack plenty of GPIOs for this job. Therefore, I ordered an Arduino Mega 2560 R3 which has a lot of them, 54 digital GPIOs in total.

I wrote the Arduino code upfront before my order arrived. I used a Google Spreadsheet to help deciding which pins of the Arduino I use to keep the wiring chaos at a minimum. Then, I created some mapping tables in the Arduino Code.

After it arrived, I wired a breadboard to the prototyping shield that came with the Arduino according to the specifications of the ROM chip. After having everything wired up, I was quite happy that it didn’t look too chaotic, definitely maintainable.

I did a dry run to verify that the code works fine, fixed some issues here and there and then started to desolder the K1m Wave ROM.

Given that the chip is not socketed , I had some work to do 🤔 I didn’t want to risk ruining the K1 at all costs so I had to be extra careful! The plan was to put the chip back into place after having finished reading it.

I started by adding fresh solder to the pins and furthermore connected each pair of two pins together. This was a preparation for the next step, I heated the new joints up again and used a pump to remove it. The result was pretty good already, some pins required some manual extra work but after a while I was able to remove the chip.

After the dump had finished, I had a first look at it, mainly to verify that my code to dump the ROM was not faulty, I didn’t swap any address lines and such.

I have not been able to find any text or something that would tell me if the dump was correct or not. I verified that all 8 bits are not always zero and not always one, but I couldn’t guess if the data is correct just by looking at it in a hex editor. As it is a Wave ROM, assuming it might contain mostly audio data, I converted the text dump into a binary and loaded it in a wave editor.

When I saw and heared it I was so excited! 😍 Although something was obviously wrong, at the same time, it verified two important of things:

Though I recognized some of the used waveforms, they appeared to be heavily distorted. I imported them both as signed PCM and unsigned PCM data, but that didn’t help.

I browsed a bit in the ROM and found the sine single cycle waveform.

Apparently all negative waveform values were inverted. I added a small code snipped to the wave ROM text-to-binary converter to fix it:

After I did that and loaded the wave ROM again I got goosebumps! 👍All waveforms were present, in a quality that is, obviously, much better than anything I had before.

Having the data as audio data, I was able to verify that there is only audio data in it, there is no meta information, such as offsets, any kind of init pattern, whatever. The whole ROM consists of audio data only.

I began analyzing the file by adding markers to the waveforms. What I got quite quickly is, that every waveform has a length that is a power of two. The lengths are different, ranging from 4096 samples (some of the drums) to 32768 samples (choir, strings etc).

Knowing that every length is a power of two helped a lot to set the markers at their correct positions, resulting in perfect loop points.

What I also noticed: There are only 30 PCM waveforms in it, although there are 52 PCM waveforms that you can select. This is because the waveforms are used multiple times. For example, there is a one-shot Voice (Wave 233) and a Voice Loop (Wave 238). They are based on the same waveform. This is the same for all loops.

The reversed waveforms that you can select are not present, the K1 generates them in realtime by just playing the waveform backwards.

All „Alt“ loops are not present either. The K1 plays them as forward-backward-forward-… loops.

All „Omnibus“ loops just play through a larger range of the wave ROM. If you listen to the audio above, you can even hear all of them. For example, Omnibus Loop 8 plays a loop consisting of 6 waveforms: F. Guitar, A. Guitar, Piano Noise, Pan Flute Attack, String Attack and Bowed String. Its easy for the K1 because that is the layout in the Wave ROM. The picture below illustrates it.

On the left side of the picture, you can see how I named my markers. I use these markers to map segments of the Wave ROM to waveforms 1-256 when I load the Wave ROM in the VSTi plugin.

The single cycle waves are stored in the Wave ROM, too, but in a much different way.

It took me a while to understand what I am looking at. Initially, I thought that my conversion code is broken and that there is still a signed/unsigned/something mismatch.

One of these cycles is always 128 samples long, something that I’ve read previously somewhere. And each cycle seems to exist 5 times. Why? And these snippets are definitely not loopable.

What helped me to understand this is to compare the wave ROM data against my recordings:

What the K1 does is, it uses the cycle twice. To form a loop of one waveform, it uses it once in forward mode, the second part is the same cycle, but inverted and negated. If I do this manually in the wave editor, the result looks like this and is a perfect match to the recording:

So what is stored in the ROM are half-cycles only.

The next topic was to figure out why there are always 5 repeats for each waveform. I quickly verified that this is always the case for all single cycle waveforms by calculating the following:

In one of my previous articles, I talked about that some of the single cycle waves are multisamples, and this is what the 5 variations of each waveform are for.

Now the only problem was to find out when to use which multisample. I had another look at my multisample markers that I’ve put into my recordings and noticed that, if there is a multisample transition, they always happen at the same notes. Something that I just didn’t notice. After looking at each of my recordings and writing down the notes, I had a list of 5 different notes that were used, exactly what I was looking for. The final mapping for multisamples is:

You may have noticed that the range of one multisample is one octave and that there is support for 5 octaves in total. The reason why I didn’t recognize all multisamples while recording is, that not every waveform uses them. For many waveforms, the data in each multisample is identical.

After adding support to load the Wave ROM in my emulation, the quality increased significantly! 😎
Some of the not-really-good sounding singles now perfectly match the real K1. Especially bell-type sounds that use the amplitude modulation were missing the very low and very high frequencies, now they are as present as on a real K1. I’m going to post new audio demos soon so you can hear the improvements.

One final step is missing: I still have to put the Wave ROM chip back into my K1m. Instead of adding it directly, I’m going to add a socket to the K1m board and insert the Wave ROM there. The socket didn’t arrive yet so I have to wait some days before doing so.

Update: The socket has arrived and the K1 is fine again.