I am sitting here and I’m overwhelmed by the amount of positive feedback that I have received today. 😊 I didn’t expect that so many people are still interested in such an old 8 bit machine.

Thanks to everyone that contacted me to raise issues, improvements and to all donators, absolutely love all your support! ❤

I updated Nils‘ K1v to version 1.03, which brings the following fixes & improvements:

During past weeks, I worked a lot on the User Interface. For faster iteration times, I did the layout in Unity3D and wrote an exporter to create an xml and bitmaps for VSTGUI. This allowed me to do adjustments to the layout very quickly:

The first layouts that I posted some time ago had to get some updates. I forgot a section to set the name of a Preset and the Play mode page had to get some additional buttons, plus a search box to find presets quickly.

Some people pointed out that it would be better to have all sources on one page for faster editing. I tried it, but it just didn’t fit on one page properly. I didn’t want to ruin the design completely and the editing functionality is already really good in my opinion.

For the emulation engine, I had to do some minor finishing touches and fixed some bugs:

And lots of other smaller things! 👍 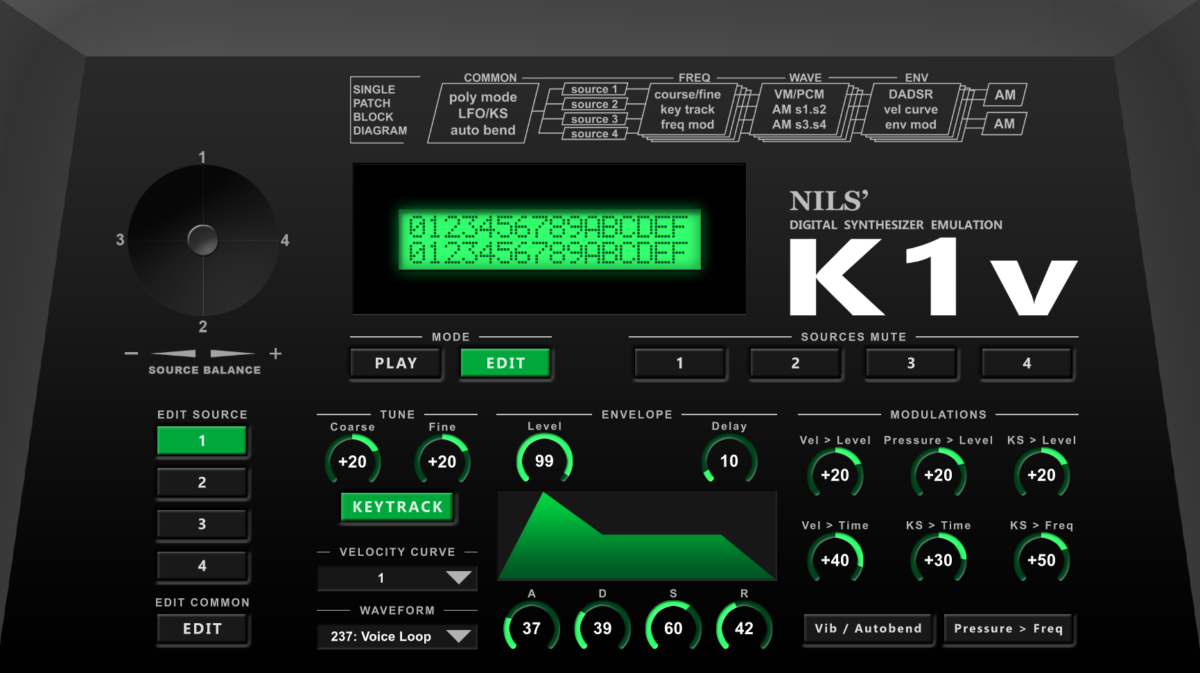 A new audio demo is ready. I kept a lot of the old one but added some additional Singles from the ROM cards and a Vibraphone to demonstrate an AM preset.

Obviously, a big change is that the samples are now from the original K1m Wave ROM. Other than that, all the modulations are now properly implemented and I did a lot of A/B testing to match my real K1m. Without all of this, most of the new sounds (many of them being FX) wouldn’t even work.

Some reverb & EQ has been added, everything else is just the K1 VSTi

I played around with some UI mockups. Completely work-in-progress of course. The lower section will look different to a real K1m as I want a better editing of course, with envelopes being displayed graphically etc.

After I had finished dumping & integrating the waveforms, I concentrated on the parameter side again. I finished the implementation of all parameters that make up as Single and browsed in the Factory Presets and the ROM cards to do a lot of A/B comparisons to match the original K1. For now, I’m really happy with the sound (new Audio Demo in next post).

Some details about some of the things that I’ve implemented lately:

This was pretty much straightforward, what the K1 does is that it multiplies one source with another. The only thing I needed to test here was what happens if a source is muted and what is different when the AmpMod is set to S2>S1 vs REV.

Not really a big deal but as I have been asked if AM would be implemented. Yes, of course.

I had to do another round of Velocity Curve adjustments. The problem that I was facing is that, if I record all velocity values from 1-127, I get a result that I can easily transfer to an internal table, but the problem is that the recording is affected by the envelope level itself, which is not linear and which I already map.

It would be nice to just use the velocity levels directly for the envelope level, but that doesn’t work because the velocity curves are used to modulate some of other things, too: The envelope attack duration and the autobend depth.

If I would use velocity curves here that are affected by the envelope level already, it gives wrong results. As I didn’t have any change to find out what the velocity values are directly, I used the envelope level values that I recorded and adjusted them in Excel to be a bit closer to the graphs that are printed in the manual. Unfortunately, the graphs in the manual do not match the real results in the recording at all, so I had to do a lot of A/B comparisons to get it right.

Below is an image of my Google Spreadsheet, forgive the bad names for the curves 😎

The Autobend implementation in itself was not that complicated, but the autobend depth value had some challenges. If the autobend depth is at maximum or minimum (+50 or -50), the range is exactly one octave up or down. But a value of +/- 25 is not half of an octave, the mapping is completely different. Large values have a much larger effect in the rate of change than lower ones.

I figured out that the mapping is identical to the vibrato depth, which can modulate +/- one octave as well, so I finally had something I have been able to reuse.

I solved the vibrato depth curve some time ago already. I used an LFO set to square and recorded all depth values from 0 to +50 and wrote down the frequency changes as note numbers. I think I didn’t post a picture yet, so here we go:

Autobend and vibrato is not very well explained in the manual, the only thing you get out of it is that the vibrato is delayed by the autobend time (whose mapping is identical to the envelope delay time, by the way).

But its not that the vibrato just starts immediately with full strength after the autobend time has elapsed, its fading in. Luckily, the fading is linear so it was easy to implement. After some further testing I came to the conclusion that the fade in duration of the vibrato is twice the autobend time.

The key scaling curves are another thing that I had to record to figure out the mapping. What I found out is that every KS curve is within a range of Midi Notes C1 to C6 (at max, some of them are shorter).

I recorded all of them and did the mapping to note transposes in Excel again. The curves look like this: